The Fastest Aging Housing In America, In San Diego? 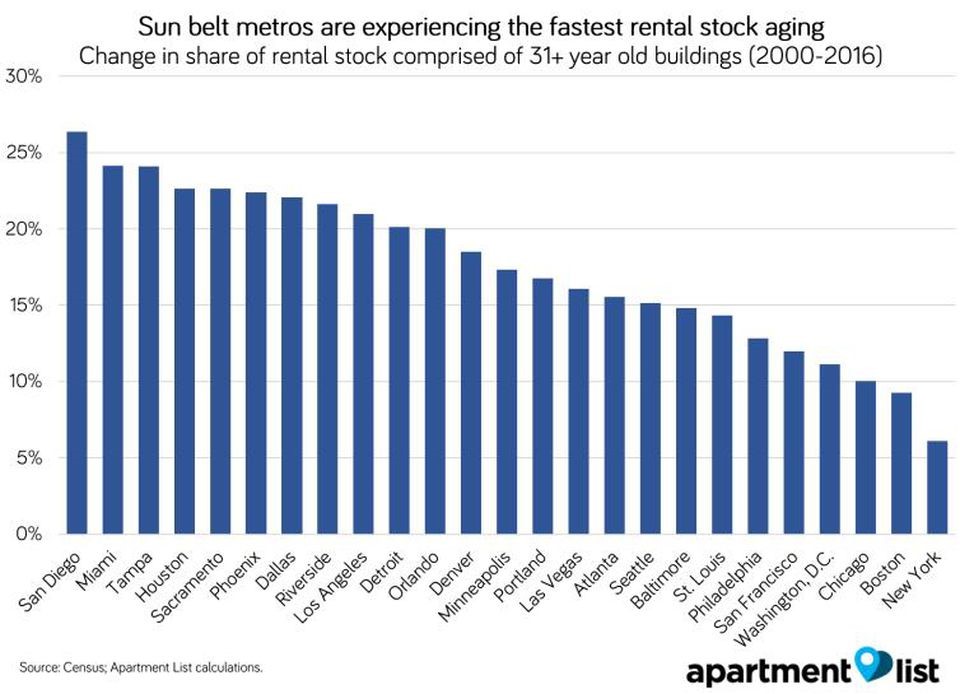 Why in the world is San Diego, generally considered a young city, topping a list of U.S. cities with the most rapidly aging rental housing?

• America’s Middle-Age Champion
• A Building Boom, Then A Regulatory Backlash
• A Crack Of Light On The Horizon
• Is There An Opportunity Here?

How Can This Be?

The accompanying bar-chart does indeed show San Diego as the clear front-runner in this less-than-desirable ranking. The explanation lies in the details. The ranking is for the proportion of the housing stock that reached the age of 31+ years between 2000 – 2016. These dwellings are hardly old, let’s just call them middle-aged. Anyone who has been around for more than a few decades can quickly connect the dots that have led to San Diego’s middle-age spread.

A Building Boom, Then A Regulatory Backlash

San Diego experienced a banner period of apartment construction between the late 1960’s through the late 1980’s. Those apartments are now 30 – 50 years old. This fits smack-dab in the middle of the time frame chosen by the authors of the accompanying chart, and helps to explain San Diego’s #1 position.

However, there’s another piece to this puzzle. The chart refers to the proportion of the housing stock reaching its 31st birthday. San Diego has had a dearth of apartment construction since 1990, which increases the proportionate representation of units built between the late 1960’s and the late 1980’s.

Why The Dearth Of Newer Apartments?

By the late 1980’s, the region was grappling with both an over-built apartment (and condo) market and a populist backlash against higher-density housing. Many of the regulatory artifacts of that backlash are still in place, and have become even more restrictive with time.

Very few apartments were built during the lengthy recession that sank the local economy from 1991-1996. However, once the economy recovered in 1997, the regulatory barriers restricted new multi-family construction. With the accompanying higher cost structure, developers found it difficult to economically justify new construction except at the upper end of the market, where higher rents help offset the regulatory burden.

These newer, more luxurious apartments then became obvious candidates for condominium conversion during the housing bubble in the early 2000’s. In addition, the high regulatory costs continues to impede new multi-family development.

As I travel the country, it’s refreshing to see the dynamism in many cities as they produce housing for Millennials. In comparison, it makes much of San Diego appear stagnant and, sad to say, tired. Like a city that, unfortunately, belongs at the top of the above chart.

A Crack Of Light On The Horizon

Fortunately, key players in San Diego’s city government are finally recognizing the problem and doing their best to change the entrenched status-quo. Our challenge is to overcome the notion that any change is likely for the worst.

There are a number of large local developers as well as national firms actively working to provide much-needed multi-family housing. In addition, San Diego has a growing cadre of energetic and creative developers making inroads in attractive, small-to-mid scale infill development. Examples include the Murfey brothers, Russ and Scott, architect-developers including Jonathan Segal and younger players such as Andrew Malick and Mike Burnett.

Their ranks would undoubtedly swell to provide the housing required for our Millennial generation, but only if San Diegans can be convinced that the change will be for the better. Both the pro-housing City officials and urban homebuilders face a difficult uphill battle against reactionary activist. I wish them well.

The choice of 31 years as the definition of “old” for apartments was not a random figure. Apartments tend to suffer far more wear and tear than single family homes. Some investors draw a line at 30 years of age, avoiding older properties. Does this create an opportunity?

In prior decades, it was difficult to justify renovation expenditures beyond basic cosmetic upgrades, such as paint, carpet and appliances. Now, in a growing number of cities that suffer from a shortage of rental housing, it is frequently cost-effective to conduct extensive renovations in 30+ year-old properties in order to reposition the units upmarket. Long-time owners frequently think of renovations within the confines of four-figure cosmetic upgrades. Such limited work is typically insufficient to reposition the property.

In closing, I want to acknowledge the social commentators who bemoan the displacement of lower-income residents that sometimes occurs when apartments are modernized. They have a valid point. However, I lived through the spreading urban decay that plagued San Diego during the stagnant 1990’s. Failure to revitalize an aging housing stock brings its own set of problems that can be far worse than the adverse effects of gentrification. If you are not convinced, I’ll encourage you to visit Baltimore, Detroit, or as I just did, Chicago’s West Side so you can experience these problems firsthand.